Thinking of spending your Hallow’s Eve in one of the trendiest and coolest places in Tokyo? If you love dressing up, street parties and rubbing elbows with well-mannered Japanese, then Shibuya is the perfect place to be whoever you want to be and get a little crazy. After all, Halloween only comes once in a year, right?

If celebrating Halloween in Shibuya, Tokyo is in your bucket list, then this travel guide will definitely help you so you’d know what to expect. Read on because you’re in for a TREAT! Yup, no TRICK! Unsure what to wear during the chilly, autumn night of Halloween? This actually depends on who you want to be and your weather tolerance.

The most popular costumes that you can see in the streets of Shibuya are:  Bloodied Japanese School Girls, Wally from “Where’s Wally, Mario Brothers, Bloodied Nurse, Pokemons, No Face from “Spirited Away”, Sailor Warriors, Scary Nuns, Marvel Superheroes, Goku from “Dragon Ball” and anything under the sun really.

When we were there, we even saw a group of topless guys wearing only jumper pants, wings and halo, women wearing super sexy bikini and high heels, while others also cross dress just for fun.

So yeah, you can wear anything under the sun, no judgements. 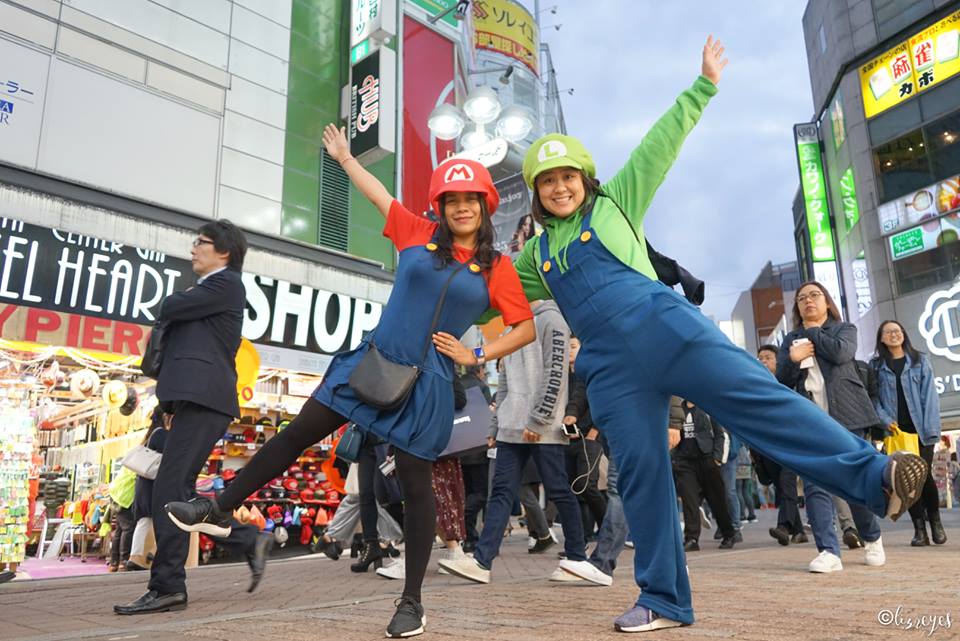 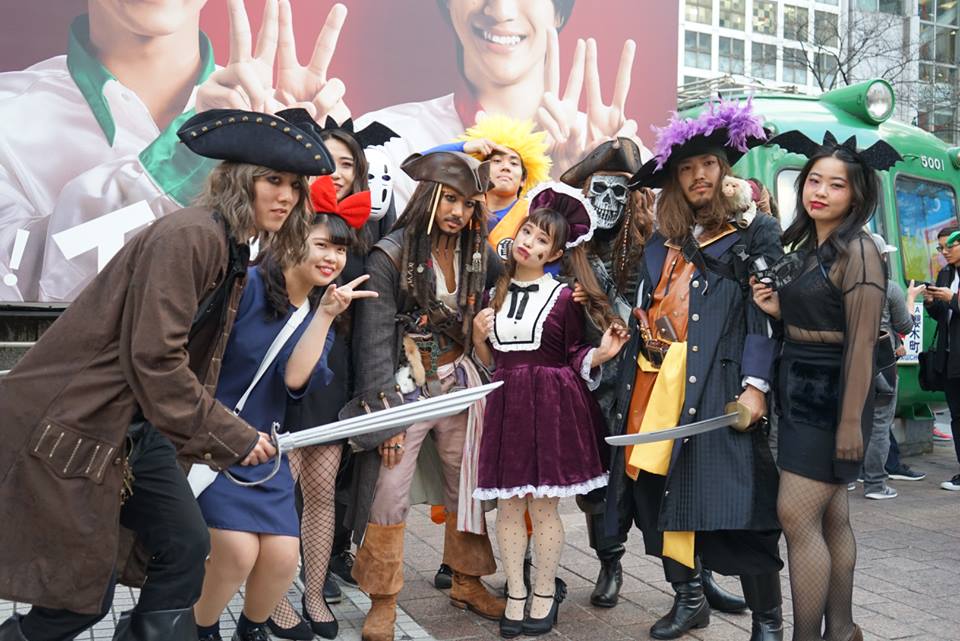 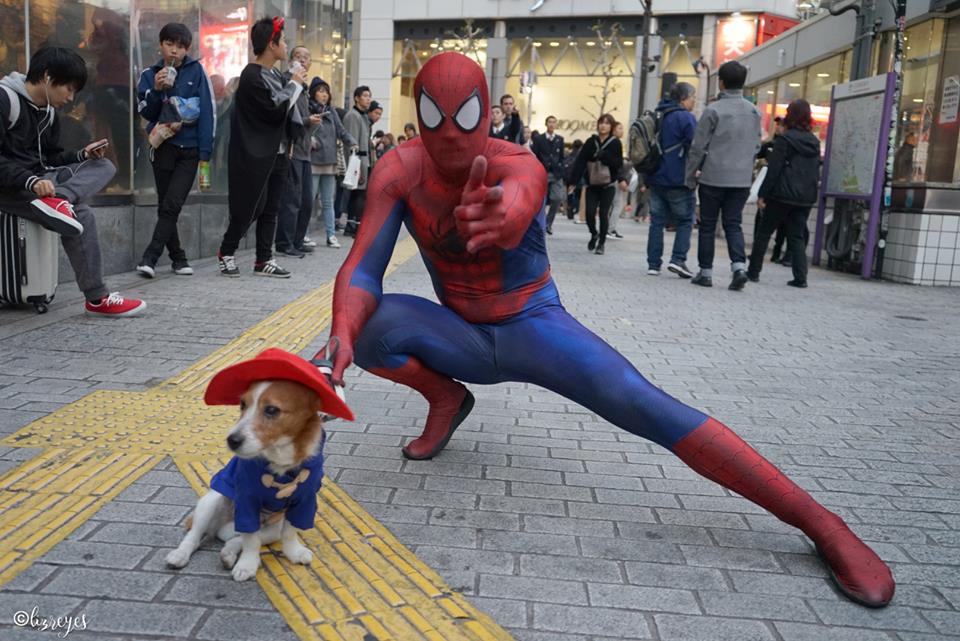 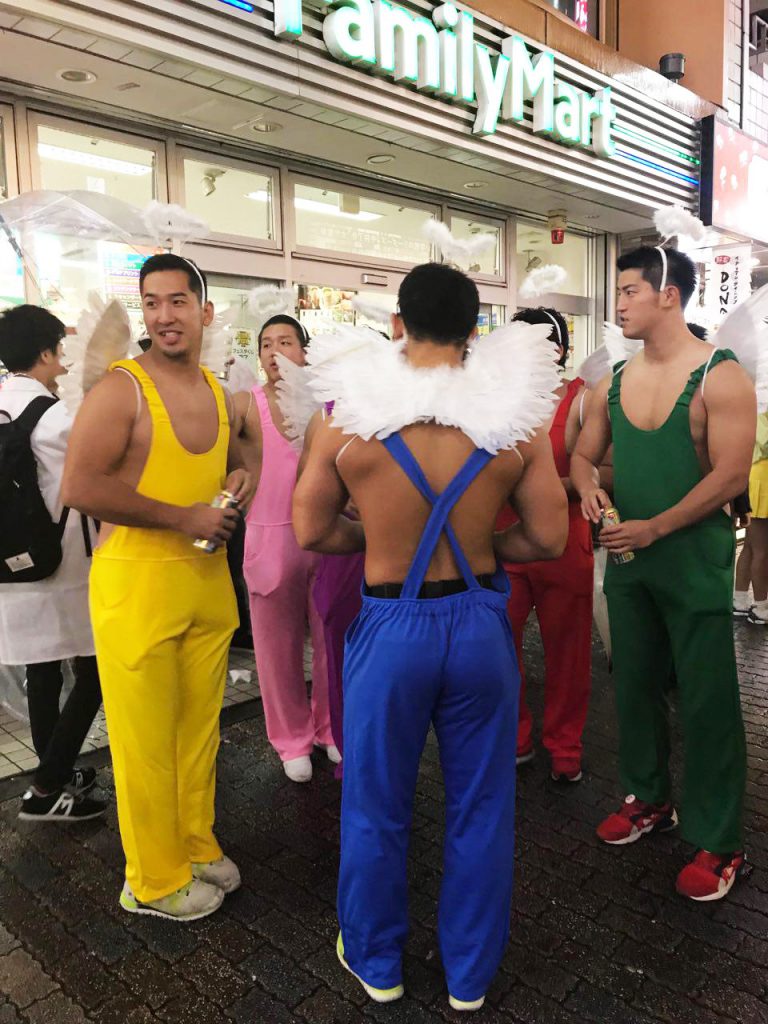 WHERE TO BUY COSTUMES?

If you did not bring any costume with you, don’t fret, Don Quijote, the biggest discount store chain in Japan, is almost everywhere. During Halloween season, the store is packed with different kinds of costumes and props to complete your Halloween ensemble. Price range is usually 3,000-6,000 yen. Not bad!

If you want a more upscale costume and feel that it’s more convenient for you to just rent one than buying, then heading to Takeshita Street (just across Harajuku Station), or also known as the “Cosplay Paradise”, would be a nice option. Although expect that the rental fee is more pricey than buying your own costume at Don Quijote. 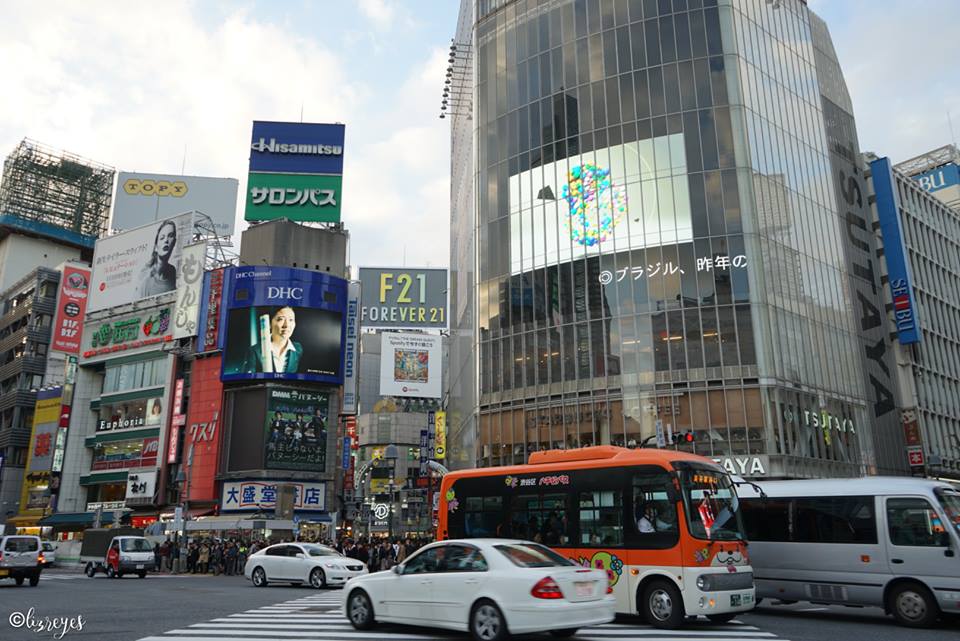 In the street. Yes, you can literally just party on the street. The most common thing that Japanese do is just buy a beer or any liquor in a nearby convenience store and just stand or stroll along the narrow streets of Shibuya to join the throng. There are lots of restaurants that also hold their own Halloween Parties but of course price of drinks are more expensive compared to the alcohols from convenience stores. Also, if you plan to really drink the night away with your  friends, make sure to buy lots of beers or sake because they easily get sold out.

I’m really not sure if where’s the exact place where people hang out but once you get off Shibuya Station, Hachiko exit, just follow the crowd. If you want a more detailed instruction, here it is:

I. Get down at Shibuya Station then proceed to Hachiko Exit.

II. Across the Hachiko Exit, you will see the building where Starbucks is (2nd floor), there’s also a big Tsutaya signage.

IV. From Tsutaya, turn left to the small alley (Udagawacho), you will see a Forever 21 signage.

V. Just start walking and strolling wherever you want to go.  This is actually the place where the party starts. 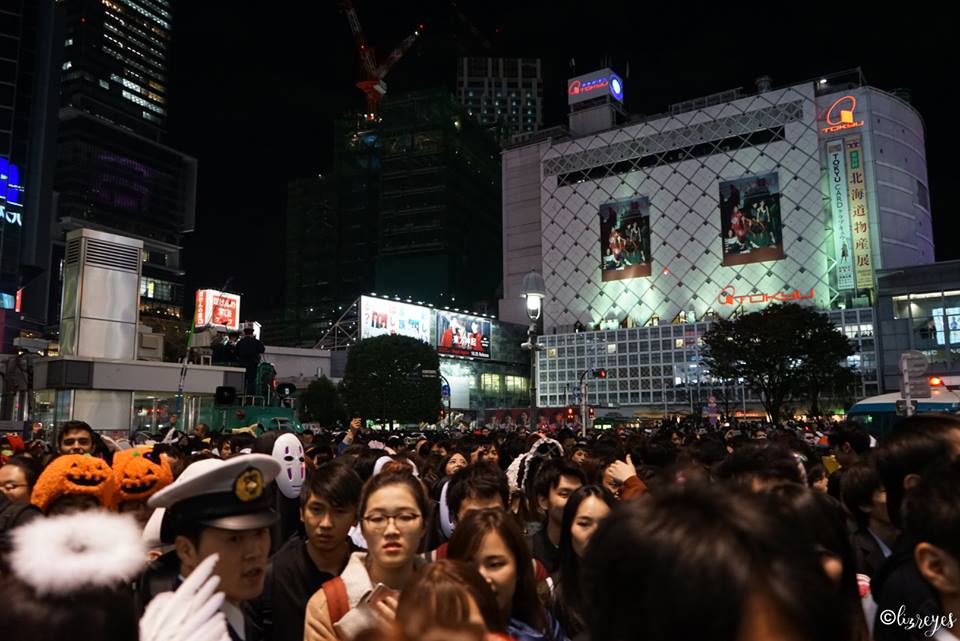 HOW CROWDED OR ROWDY IS THE STREET PARTY?

Really crowded! But knowing the Japanese, they really behave well so nothing to worry about especially on the rowdy part. We really did not stay that long when we were there because it’s pretty cold outside and we need to be up early the next day for our trip to Nikko.

But for a bit of an overview, the inner parts of Udagawacho was okay but the main entrance to the narrow street was pretty standstill. You just go with the flow of the people so you can move. Good thing there were policemen everywhere ready to assist and guide the people. Really love how efficient and ready the Japanese are. 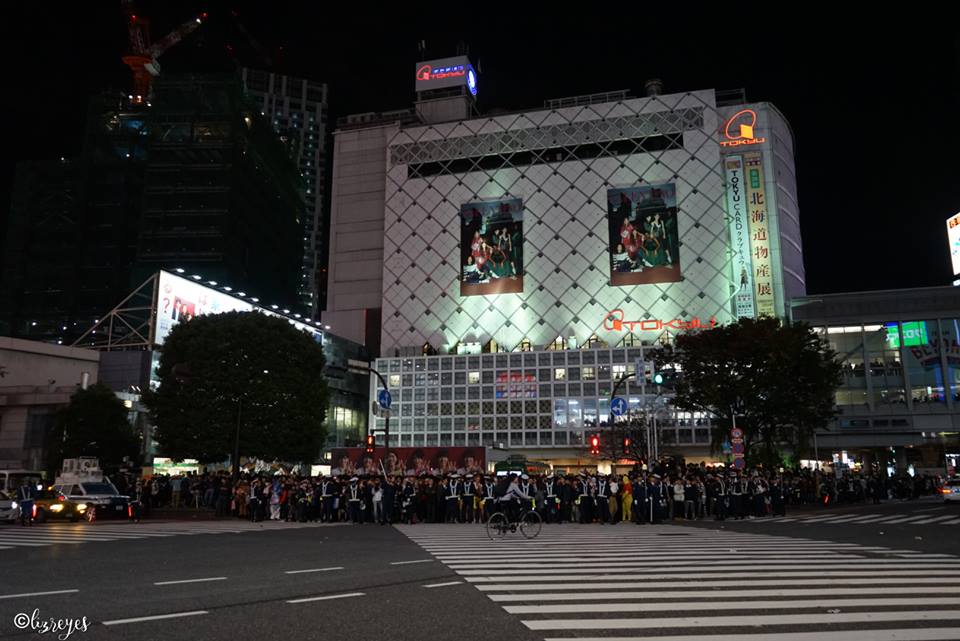 WHAT TO EXPECT IN SHIBUYA HALLOWEN PARTIES?

Lots of fun and cuteness. Seriously, you don’t need any plan when you go there. Just be sure to load up before drinking some booze. Prepare your legs for some serious standing, walking, and don’t be surprised if some random stranger will approach you for a photo. That’s very normal. Just be flattered that they like your costume. On the other hand, you can also do the same. Ask a complete stranger for a photo and I’m pretty sure he/she will agree.

Expect train stations to be crowded so plan your travel and transportation accordingly. If attending Halloween parties in Shibuya is your main agenda in going to Tokyo, I suggest you just stay in Shibuya or Harajuku areas. 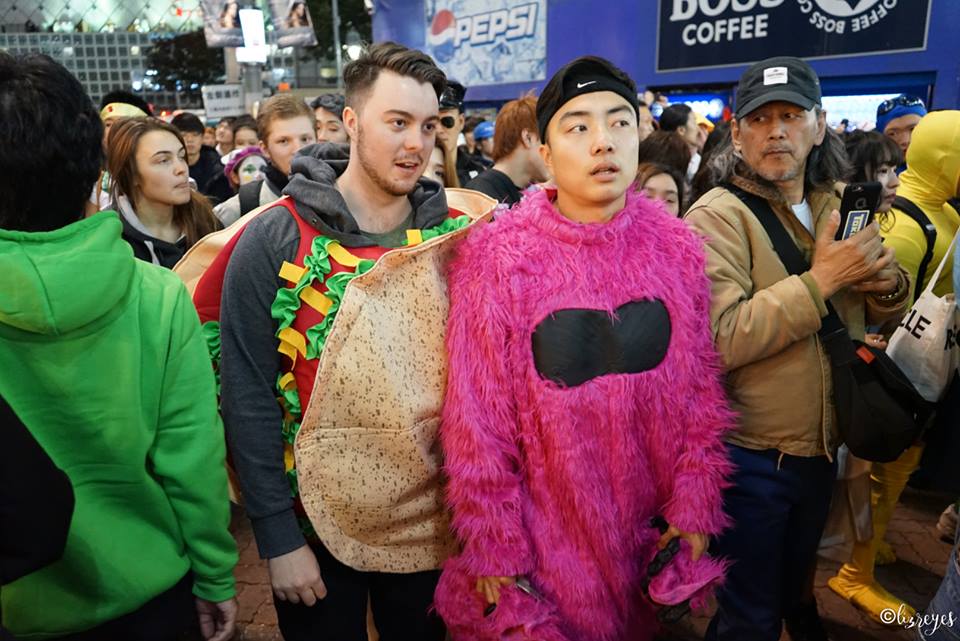 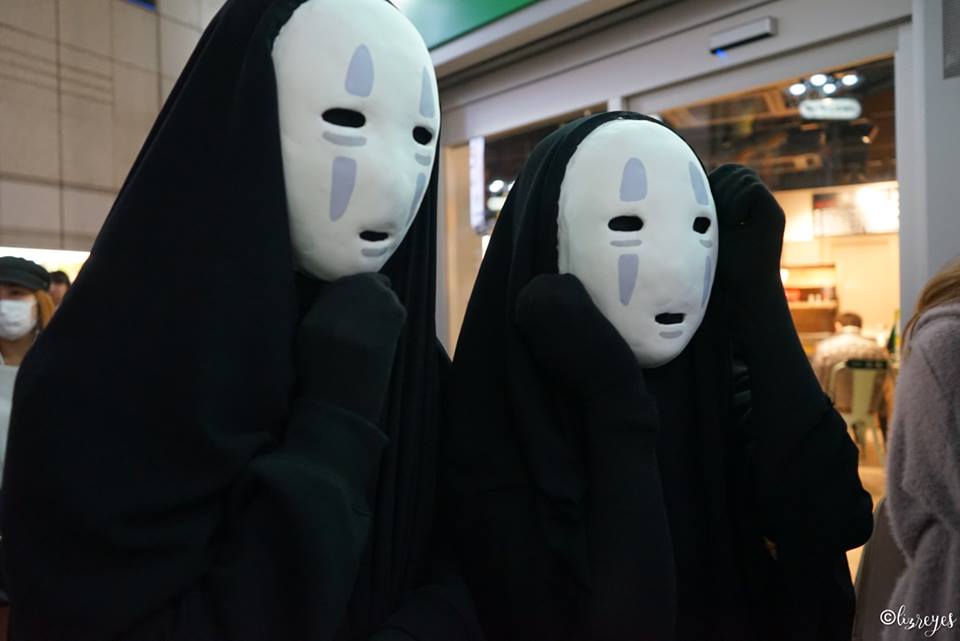 Also, days before Hallow’s Eve, Shibuya is already packed with people strolling, taking photos and partying. So if in case you can’t join the crowd on the evening of October 31, you can just drop by Shibuya anytime to see the happenings. You’d be surprised that there are already lots of people wearing their own costumes so feel free to join.

Expect BIG crowd and chilly weather so pick your costume properly. You wouldn’t want to wear a sexy french maid costume if you are not used to the autumn weather in Tokyo.

May I remind again that there will be lots of walking (you’re in Japan so that’s expected) and standing amid the crowd, even though that pair of stiletto looks gorgeous in your LBD and horn, ditch it if you feel you won’t be comfortable in it. 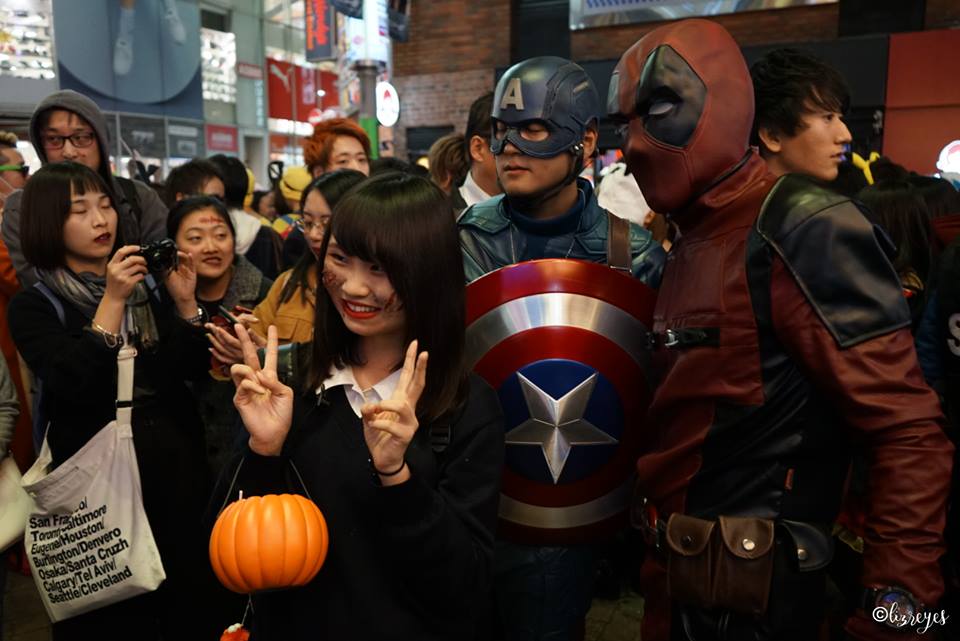 HAVE FUN IN TOKYO! HAPPY HALLOWEEN!!!