Who Needs A Man?! These Places In The Philippines Are Perfect For Female Solo Travelers

Going on a journey all by yourself, especially if you are a woman, has got to be one of the most liberating experiences you’ll ever have. Some people, especially your family, might disapprove of the idea of you traveling alone in an unfamiliar land perhaps because they fear that you will be a potential target of being duped or that you won’t even be able to read a map to save yourself.

However, cliché as it may sound, there’s nothing a man can do that a woman can’t. In fact, women solo travelers from all over the world are now increasing in number. From the United States to India toSoutheast Asia, more women are starting to see the benefits of traveling alone.

Thankfully for us, the Philippines, in general, is a peaceful country with very loving and hospitable people. If you’re daring enough to try traveling by yourself, you may want to start with this list of places conducive for solo travelers – especially if you are woman trying it out for the first time.

Batanes is the smallest province in the Philippines that has a population of less than 17,000 and with the lowest crime rate in the country. In fact, some even regard Batanes as home to the most honest Filipinos. One concrete example is the Honesty Coffee Shop, a small sari-sari store in the town of Ivana, where the honesty of the Ivatans (locals of Batanes) and tourists alike is tested. No one mans the store. If you wish to buy something, you just get it, list it down in a logbook, and then leave your payment inside a box.

Public transportation is very limited in Batanes so its rustic beauty is best explored by foot or bike. The straight out of a magazine landscape and rolling hills overlooking the azure sea is definitely a breathtaking sight to behold, a perfect place for people who want some peace of mind. Sabtang and Itbayat, the neighboring islands of Batan, can be accessed via a faluwa or a motorized passenger boat that looks like a small ‘Noah’s Ark.’

If there’s anything you need to worry about, it will be motion sickness. Water tends to be very rough in Batanes because you will be sailing in the middle of the Pacific Ocean and the West Philippine Sea.

How to get there: PAL Express and Skyjet Airlines fly to Basco, Batanes from Manila. 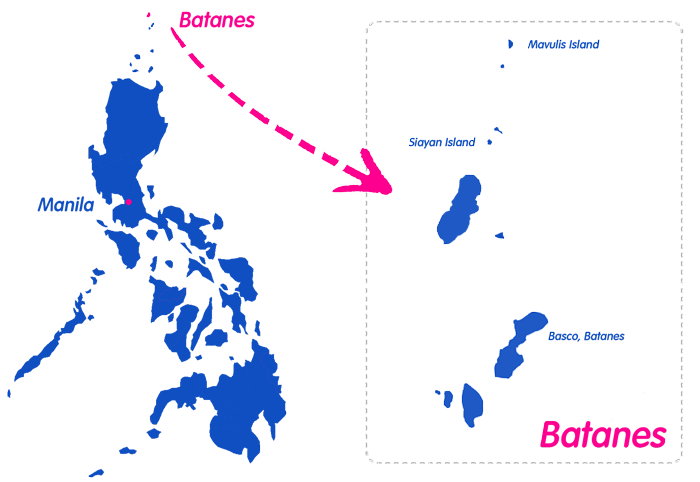