Best Places to Experience Lent in the Philippines 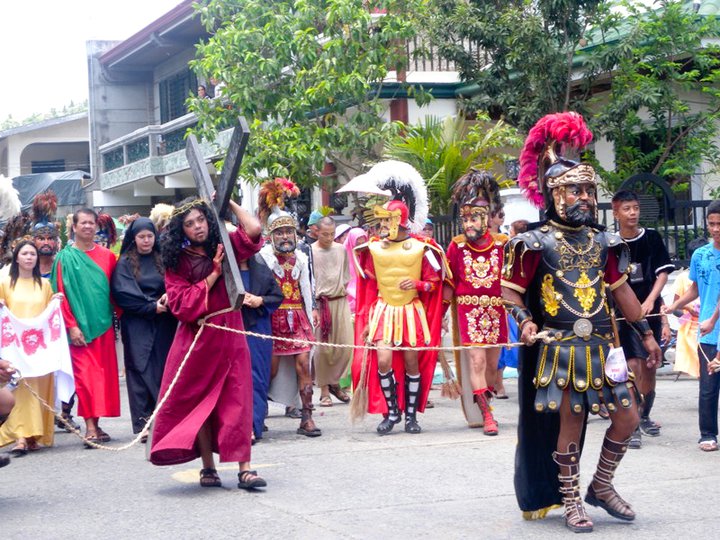 1. Marinduque. Marinduque is a small heart-shaped island in the Southern Tagalog, which, coincidentally, is also in the center of the Philippines. Dubbed the “Lent Capital of the Philippines“, Marinduque welcomes thousands of tourists during the Lenten holidays to experience religion and culture at the same time.

On the first week of Lent, which usually starts on Holy Monday, Morions or the masked Roman soldiers can already be seen roaming around the streets of Marinduque, or Boac, its town capital.
Tourists are also welcomed by the Morions at the Balanacan Port in Marinduque to give an instant feel of the province’s Moriones Festival.

The Senakulo, a Lenten play that depicts the life, suffering, and death of Christ, starts staging on the evening of Holy Wednesday. The Via Crucis or the Way of the Cross starts on the early morning of Good Friday. You have the option to go along with Christ, the other penitents, and Morions or simply watch–though it is highly suggested that you go with the Way of the Cross so you can also internalize Christ’s suffering and just consider it as another form of penitence. The Via Crucis usually starts between 7:00AM and 8:00AM and ends with a “crucifixion” before lunch. The Senakulo ends on the midnight of Easter Sunday and with the most anticipated presentation of all, since the resurrection of Christ will be staged. Early morning of Sunday, most people run to the beach as a sign of celebration for the risen Christ.

When in Marinduque during Holy Week, be sure to take some snapshots of its famed Moriones Festival. Take a pose with some Morions or, specifically, look for the Morion Longinus. He’s easy to spot–he’s blind on one eye and is the most famous Morion off all. Read the Bible or, better yet, listen and watch the Senakulo carefully to know why.

2. San Pedro, Cutud, Pampanga. The Cutud Lenten Rites is famous for the re-enactment of Christ’s crucifixion, with the actual nailing of people on a wooden cross. Tourists and foreign media flock to Cutud just to witness the 55-year-old street play, thus, turning what is supposed to be a solemn religious celebration a highly commercialized one. Just a word of caution though: this is not for the faint-hearted. If the mere sight of blood makes you queasy and nauseous, then better not go here.

However, if you are into photojournalism, then going to Cutud is an experience not to miss. The event has a VIP area for media and photographers so taking photos won’t be a problem. Just be sure that you can endure the heat of the sun.

Aside from the crucifixion, flagellants, also known locally as “magdarame”, walk barefoot around the town and whip their backs with a bundle of bamboo sticks at the end of a rope and use razor blades to cut their swollen backs so blood can come out.

3. Quiapo. Since most people head to their respective provinces during Holy Week, traveling around Metro Manila 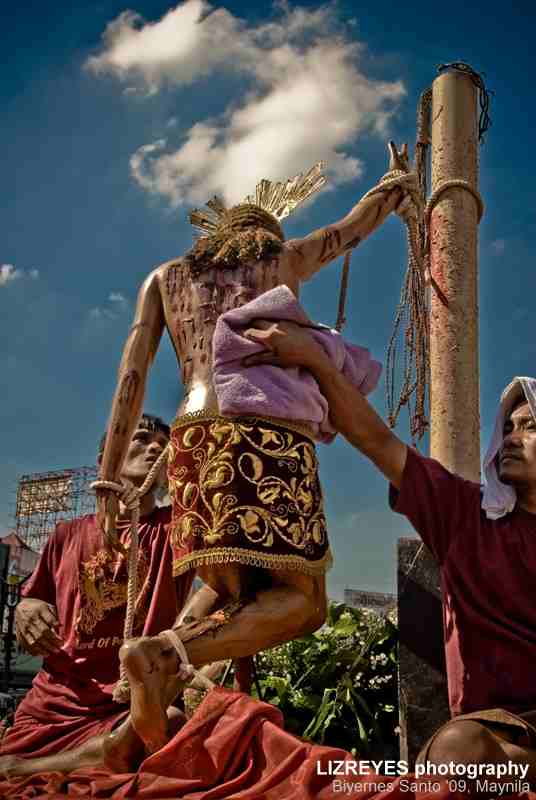 during Good Friday is always a breeze. In fact,Visita Iglesia in Manila has always been a tradition among Catholics who choose to spend Lent in Manila, and the Quiapo Church is probably one of the favorite churches among pilgrims.

During Good Friday, Black Nazarene devotees flock to Quiapo Church for the Black Nazarene procession, which usually starts as early as 5:30 AM. Various Black Nazarene replicas are also paraded along the streets of Quiapo while devotees go barefoot in imitation of Jesus on his way to Mount Calvary.

There have been various accounts of people who have touched the Black Nazarene are reported to have been cured of their diseases. Thus, like the actual Black Nazarene feast on January 9, towels and handkerchiefs are also hurleto the marshals and escorts guarding the Black Nazarene, requesting their cloths to be wiped to the statue in hope for a miracle.

Nearby churches that can also be included in your Visita Iglesia itinerary are the Malate Church, Binondo Church, Manila Cathedral, San Agustin Church, Santa Cruz Church, and San Sebastian Church.

On the other hand, the usual rowdy and busy Escolta and Delpan suddenly transform into peaceful streets during Good Friday–a perfect time for photojournalists to capture this very rare quiet moment in Manila through their lens

4. Balaan Bukid Shrine, Guimaras. If you love outdoor activities, then trekking to Balaan Bukid Summit in Jordan, Guimaras is the best activity for you this coming Holy Week. Balaan Bukid, which means “Sacred Mountain” in the Hiligaynon dialect of Panay, is a pilgrimage site of Catholic devotees that sits on top of the mountain. At the summit of Balaan Bukid is theAve Maria Purisima Shrine where a chapel is marked by a huge, white cross. It is hard not to miss this large cross when you’re coming from Iloilo to Guimaras. Climbing Balaan Bukid is free of charge but be sure to bring lots of water to keep you hydrated, and put on some sunblock before climbing as the trek will take 45 minutes. On your way up, be sure to take note of the 14 Stations of the Cross.

Written for and first published on ProPinoy.net